I picked a mess of Roma tomatos and some squash from our veggie garden this evening. I decided to grill them all up and put them over Chicken Ravioli. I took a video of the process and cut down about an hour of cooking to less than 3 1/2 minutes.

It ended up being a pretty good impromptu meal. 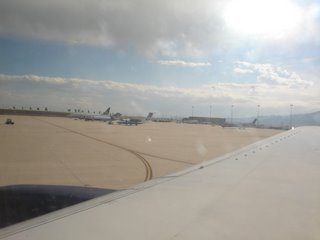 So I'm sitting here on a 757 rerouted from our destination (Denver) to Colorado Springs. I guess there was some bad weather above Denver and they've plopped us down for goodness knows how long.

So....a picture of the taxi-way seems like a good idea.

1) Short videos. The videos that have leveraged the greatest click throughs (though not the greates number of views) have been between 5 and 10 seconds. One of jellyfish and one of squid. It has me thinking that I need to concentrate on fish vids!
2) Posting often. I took a bit of a break and the number of clicks dropped like a ton of bricks. I suspect that to leverage the greatest number of eyeballs for ALL ones videos requires that you be in the “New Video” section pretty much all the time. I also suspect that when someone finds a video in the “New” section that they click on the name of the video poster which allows them to see all the videos that person has posted.
3) The ad at the very end needs to be compelling.

For how long will main stream media buyers buy ad space if the number of clickthrus doesn’t translate into sales? Or perhaps they will and are translating into sales.

Context takes one step further and allows you see locations as well. Flickr has added very cool geo-tracking to their offering. A tool helps you identify what the long and lat is for a picture you took—for this to work you need to know WHERE you took it. This tool then gives you a little code to plop into your contextual tags or into the description of the image. This then links to a Google map that pin points the location of the images orginating location. It is pretty cool and quite easy to use. Best of all it is free!

How can these new contextual tags be used in the art world? From here it seems trivial to set up text based contextual tags that identify where great art exists in a city or country. Take pictures of the great work you see, geo tag it, post it to a blog or Website. A public art program could use it as a crude cataloger of work and location of work. Even better, set up a Flickr group and request that folks post work and the geographic location in the group. It provides a cooperative place for amateurs and professionals to work together.

One could set up a wiki allowing folks to post the information to a specific site and give a narrative of the work. Set up a wiki, embed a picture of the work with geo trackin, include a Revver video if the work is kinetic or if you want to a 360 of the work, and allow others to comment and add their own content. Throw a Google search bar in and you have almost an instant site. Using the video component and adding a little adsense and you have a chance to monetise the content. Get a few friends to DIGG it and you might start to see traffic.

Know what? I’m going to do it and post the link here. I’m sitting on an airplane flying into Denver pretty exicited by this idea.

Why Open Source is Safer than Proprietary

THIS article emphasizes how damaging the proprietry software industry can be to groups that have mission critical applications that rely on software keys to operate. Suddenly you can find youself looking blankly at an activation screen.

Caveat Emptor! Or should I say Licensee Emptor!

I am in NY right now working with the American Craft Council in their adjudication process using ZAPP(tm). They have an interesting system where by they jury once and that score carries over to all of the events that an applicant wishes to apply for. An applicant can even apply for some of the later shows after the jurying is complete by paying an additional fee later on.

Last night I posted several short videos to Revver of my walking about the city.


1st in the NY Walking Series


2nd in the NY Walking Series


3rd in the NY Walking Series


4th in the NY Walking Series

These little videos are un-edited what I shot is what you get.

Revver takes copyright very seriously. I respect them for the level of attention that they take. Last night I had a video rejected. Why? Because there was a Bob Marley song playing in the background. It was playing at the Water Park my family were visiting. It lasts for just a couple of seconds, but it was enough to have them not make the video public. I applaud them for that level of attention. I made an inquiry as to why the video was rejected and had an email answer within an hour—and this was late at night.

They appear to vett everything very carefully. On YouTube they don’t seem to have the same safeguards in place, although they will remove content IF there is a complaint.

I really hope that Revver can keep it up. At WESTAF we have learned that automation is key keeping costs down. When you have a real person reviewing all content before it is posted, you increase costs significantly.

I suspect Revver will be very successful. When it moves to the level, I suspect they will be acquired by a big company. Perhaps Apple will buy them as all Revverised videos are logged into iTunes. Perhaps Microsoft will try to buy them to stop that content from being syndicated by a competitor.

Since the 23rd I have been generating video shorts for Revver. My wife has been joking that she isn’t a football widow (to say I don’t watch much football would be an understatement) but she is a Revver widow. My main computer is in the family room, so it isn’t like I’m not around the family but I must admit that I’ve been pretty engrossed for the last few days.

1) I take video footage from the video camera and import it into iMovie. If I’ve taken content using a digital camera I will often re-encode it using ReplayToGo which employs StreamClip to resize and change a video’s format.

2) I’ll pull the clips I want to use into the workspace on iMovie.

3) I add transitions and most recently a title.

5) Upload it to Revver using the Revver upload client.

It is seriously that easy. Clips that you upload automatically show up up front, at least for a short time, giving you initial play time.

I would LOVE to see Revver’s traffic logs to try and figure out what times would be the best to have a video initally posted to get the most sets of eyes.

Experimenting with Digg, Revver, Blogger, Adsense, and Flickr has me thinking about how the sphere of social networking might help artists and arts organizations leverage grass roots opportunities to a) distribute content and b) iinteract with potential customers/consumers.

Back between 1995-1998 I produced, as part of my MFA work, three video/stage/Internet hybrid productions that experimented with allowing live audience participants to engage other audience members and performers in real time. The video was choppy and crude, but it occurred to me at the time that we were headed down a path of intense interactivity. The birth of MOO (or Multi Obect Oriented) environments was an early clear indicator that people want to interact not simply view content. I met my wife on one of the earliest and most successful MOOs—LambdaMOO and ended up immigrating to the United States from Canada.

The beauty of Web 2.0 (a term I think has become tired) is that it allows for a tremendous amount of interaction between consumers not just between consumers and providers. You can post a photograph, video, painting, almost anything and start to get almost immediate feedback on the quality of the work. There are, of course, risks. If a consumer thinks your work stinks, that opinion can very quickly colour the opinion of others. This may or may not mean that your work is good or bad but opinions matter.

Recently I heard the statement, “The Web is an economy of reputation.” If you get a bad reputation you are toast. I have a new aquaintance that I made in Vancouver recently, Kris Krug. He had his photos stolen off Flickr and reposted by another Flickr user. It turned out this person had also done it to others. There was a vast demonization of this person (you can decide if it was warrented or not) that thrust him into infamy and may well have made Kris more famous than he might have imagined—at least by way of the social networking crowd.

One of the effects of using tools like Revver and Adsense is allowing you to monetize your content. You can make money by syndicating almost any content. I posted a video of one of my dogs howling and made a buck in an hour. I’ve been playing with different kinds of video to see what would have traction. So far, a 5 second video of Jelly Fish I took in Australia has not had the largest number of views but has had the most click throughs so it has generated the most income. (We’re not talking any significant income—enough for coffee.) But this has me thinking, what has generated the clicks? Is it the quality of the advertisement at the end of the video? Is it a viewer showing appreciation for the video? Interestingly, a link to this video has been posted on a vietnemese food site.

Videographers could post a snippet,1-3 minutes say, of a video they wanted to sell. Not only would the video perhaps sell, but you could also earn revenue for people watching your sample. I saw one instance on Revver where an advertiser created multiple videos and then, presumably, bid on ONLY having their own ad at the end. They pay for the clicks, but earn a small amount back each time a potential client clicks through.

Artists can put samples of work on Flickr having the images flow through to an art blog and monetize the content using tools like adsense on the blog. Or they could put together a slide show of images that are saved as video and place them on Revver.

It was suggested to me that Digg ccould be used by individuals who create a “Digg Circle”. You create content—a post on a blog for example—and let your circle of 50 friends know that you have posted. They then all Digg that article over a short period of time driving that post to the top of Digg’s list. Digg can be remarkably successful at driving traffic to your content. Recently I posted an article and linked Digg to it. It generated a total of 4 Diggs but that quadrupled traffic to this blog over a two day period.

iMovie has a title feature that allows you to place titles at the beggining and end of your movies very easily. I titled a three clip movie of our first trip over the Sydney harbour to the Sydney Opera House. The house is a remarkable building that is really just a shell in which traditional halls are built.

So, onto another Oz video clip!