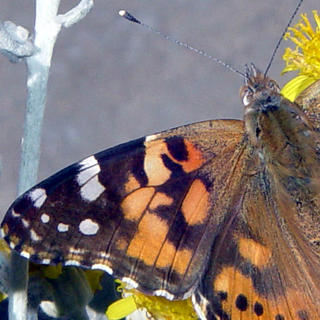 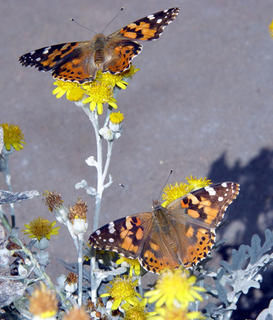 There were a TON of butterflies in our front yard this morning. I thought I'd get a few shots and share one (with a detail) here.

By using My ReplayTVs and DVArchive and VideoLanClient I've been using my iMac from day one as a TV. At least as a mechanism to watch TV. Throw in a portable firewire drive and my laptop is a portable entertainment system when I'm on planes. I've caught up on more TV that way.

Introducing the new iMac. It has a remote control and can use video content from iTunes--shows that you've missed for example--as a video on demand machine. Now while the new iPod is pretty cool, this is cooler I think. It comes with a remote even. IF they had included a TV tuner and set it up with something like the software for Elgato's EyeTV they would have had a killer machine. So many people set up their own Home Theatre Computers using MythTV for example. This could have hit that niche so easily, especially in the student market where a student might not have the room for both a TV and computer.

I think that they just missed the boat by a hair.

Today Apple announced a new iPod that is also a video player. This was not unexpected, but in many ways limited. You can't easily rip a DVD and put the content on the machine or move shows from a DVR like ReplayTV which has second party software like DVArchive that makes the process pretty easy. However, I have to watch the content on my laptop, computer, or stream it back to a Replay.

MadSkeelz on the AVSforum outlines the process like this:

"Well, you need to suck out the ReplayTV MPEG and get it into your computer. Assuming you have a RTV 4000 or better, just use DVArchive.

Then, you need to transcode the video file. You can use a free tool like ffmpeg, or a not-free tool, like FlipFactory, PopWire, Cleaner, Compressor, and prolly a bunch of others. But, this really will take a long time. [Hours, not minutes.]

Once the movie has been converted, just drop it into iTunes and sync your iPod.

Using DVArchive, you could probably automate this pretty well. DVArchive can be scheduled to automatically suck video down at a given time from the RTV to your computer. Then, you could have your transcoding application watch DVArchive's downloads folder. Anytime it sees a new file, it can act on it, converting it and dumping it to a destination you specify. Then, just have the output dropped into iTunes.

Doing this the first time will be a lot of trial/error and a big time-suck. But once you figure out the workflow that works best for you, you'll be all set."

No way I'll be doing that. I'll stick to my old iPod and my laptop with VideoLanClient. That said, Apple is experimenting with some interesting new ways of distributing content. $1.99 for a show is probably too steep in such a tiny format...but I *might* go for $99 like songs. But see, with music I listen over and over and over again. With a TV show, I'll watch it once. If its outstanding perhaps three times, but never like I listen to music.

Still, I think that this is a cool product which will sell well.

I read news from a variety of sources. I am a devoted Economist reader. I also make use of CNN, some right of centre news channels, BBC, and the CBC. One small pleasure that I've had since moving to the States from Canada 10 years ago is being able to watch "The National" on the Internet. When the lockout occured, this service ended.

I'm hoping it will be back soon now that it has been announced that the lockout has ENDED.