Index of all the Australia Posts

I'm putting an index of all the Australia Posts below so folks can follow it in order without having to go into the Blog archives. Hope its helpful 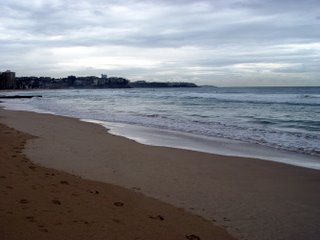 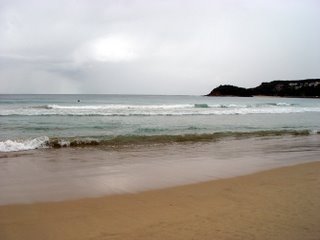 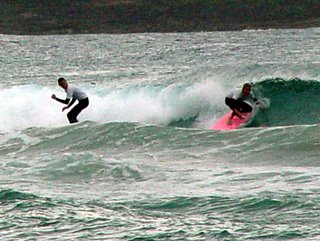 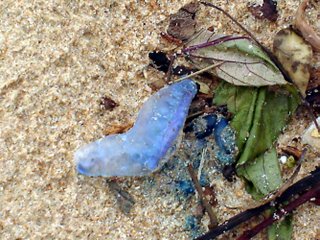 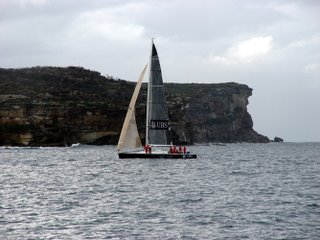 Today was our last full day. We head back to the States tomorrow.

We took the ferry to Manly Beach (a favourite spot for surfers) and went shell hunting. We had lunch and headed back to the Circular Quay to see if we had time to go to Toronga Zoo--we didn't. So we went shopping and bought Paula a couple of small opals--her birthstone.

At the beach we found, what we *think* were jellyfish, but they didn't look quite right--no tenticles. If anybody knows what they are, let me know. We avoided touching them anyway.

There were a ton of surfers out in the water--which was chilly but not cold. They were all wearing wet suits. Probably a smart thing.

On the way back on the ferry, there were a mess of folks sailboating in the harbour.

Our time has raced by. Its been a great place to spend time and we've seen some AMAZING things. 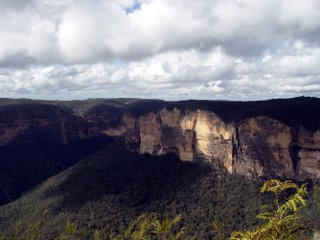 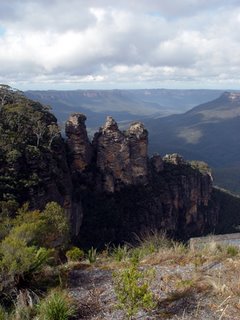 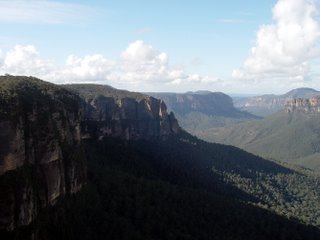 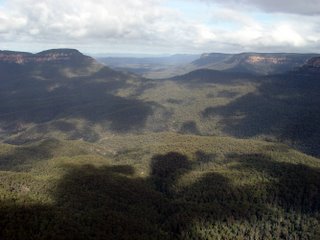 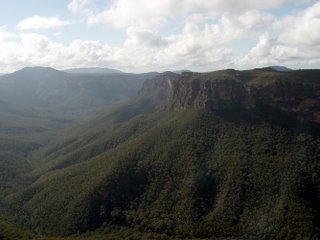 We headed up to the Blue Mountains today on a little day trip. The Mountains have the name, because the Eucalypts (that make up between 80 and 90% of the trees) have leaves that essentially gas off eycalyptus oils that are slightly blue. As you look at the mountains from a distance, the mountains have a slightly bluish tinge from the airborn oils. While this makes for a beautiful vista, it also proves explosive when fire breaks out. The interesting thing is that some trees in the forest NEED fire to produce seeds and many will grow back extremely quickly after being burned--it stimulates growth.

The mountains were created when all the continents were one single land mass. This makes for highly worn down mountains, but there are huge cuts through the mountains which, presumably, were sliced by glaciers.

It was a beautiful day. 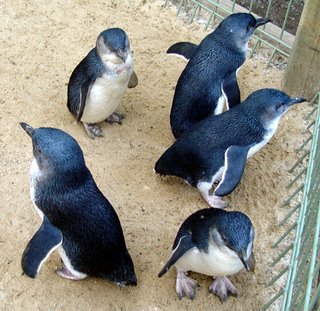 We weren't able to share pictures of the little penguins earlier because they only come on shore at night and flash photography can damage the little guy's eyes. We ended up at Featherdale again today and they have a little group of little penguins who were out playing this afternoon. So...here is a group of them. They really are blue. 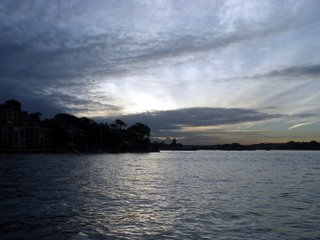 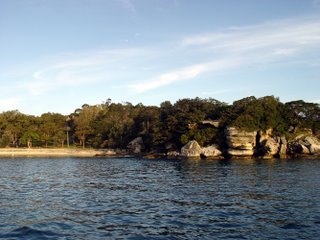 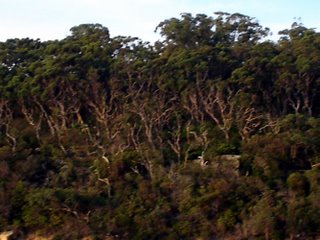 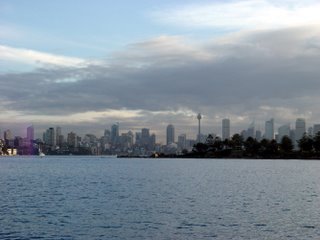 We went on a harbour boat ride today. It was kind of a ripoff for the price, but we did get some good pictures of Shark Island, the city, and other bays on the way. The ride took us to Watson's Bay and back. It was a pretty ride, but too short. It was more like a ferry ride than a "cruise" as they advertise it.

Anyhow, a few pictures for you to enjoy of the ride. 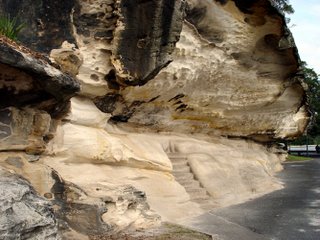 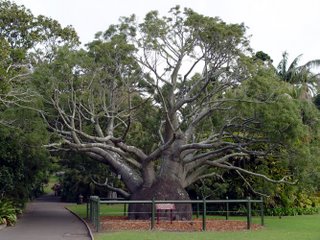 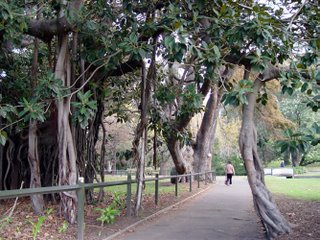 Today we went to the Royal Botanical Gardens. They are stunningly beautiful, even in winter. They keep the plantings up and running even in the winter. They have many different kinds of ficus trees--a kind of fig tree--and many of them drop roots from branches creating multiple trunks from the same tree. Most of the time, these end up winding around each other, but in some cases these end up creating multiple trunks that almost look like a stand of trees even though they are a single tree.

The bottle trees are pretty cool as well. They have huge trunks. There are also some amazing rock formations down by the water that must have been carved out many many many hundreds of years ago as the water level is so much lower now.

Next, some pictures from a harbour tour we also took today. 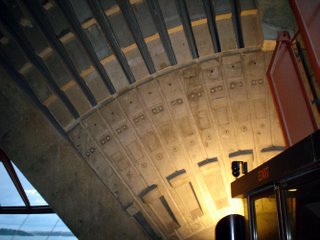 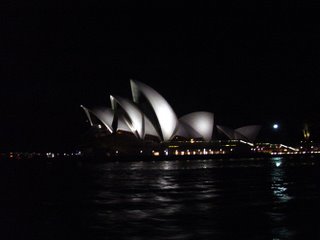 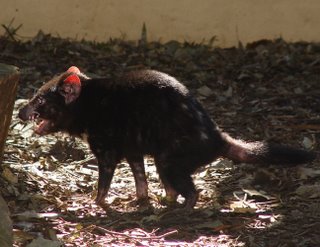 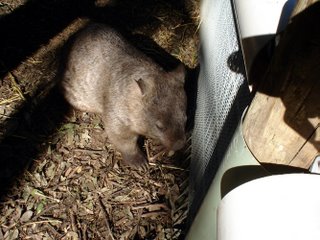 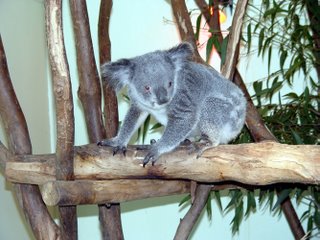 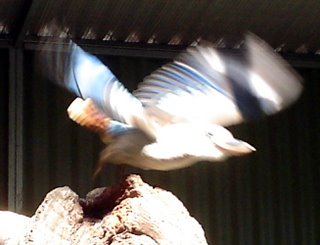 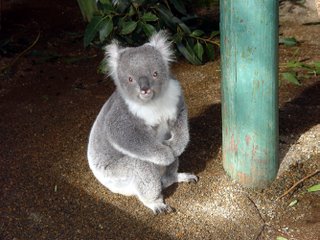 Today we went to the Featherdale Wildlife Park and then to the Opera House for a tour. At the beginning of this trek we photgraphed the outside but not the inside. While they don't allow you to take snaps in the theatres, we did get some pretty good ones of other parts of the buildings.

Featherdale is a pretty good zoo of Aussie animals. We managed to get up close and personal with a Koala--you can pet them under supervision, saw wombats up and active, played around with wallabys and roos again, and generally saw local wildlife much closer than we could have in the past. Ever wondered what a Tazmanian Devil REALLY looks like? You have a picture here. Paula took a wonderful picture of a flying bird.

This post has pictures of Featherdale, the next will be just a couple of the Opera House.